Some Inspiring Words of Swami Vivekananda.

Sri Aurobindo on Bhagawan Sri Ramakrishna and Swami Vivekananda
“What was the message that radiated from the personality of Bhagawan Ramkrishna Paramhansa? What
was it that formed the kernel of the eloquence with which the lionlike heart of Vivekananda sought to shake the world? It is this that in every one of these three hundred millions of men from the Raja on his throne to the coolie at his labour, from the Brahmin absorbed in his sandhya to the Pariah walking shunned of men, GOD LIVETH. We are all gods and creators, because the energy of God is within us and all life is creation; not only the making of new forms is creation, but preservation is creation, destruction itself is creation. It rests with us what we shall create; for we are not, unless we choose, puppets dominated by Fate and Maya: we are facets and manifestations of Almighty Power.” (CWSA 6: 84)

Categories: All Publications, On Indian Culture and the Veda

Modern civilisation has cast its pall of shadows and mists on all fields of human thinking and endeavour. However, its utter superficiality and emptiness is dawning on the more perceptive amongst men. The penetrating insights and inspiring words of Swami Vivekananda help to dispel the mists and lead towards an understanding of the true spiritual basis for human life and work. Bhakti, Jnana and Karma intermingle in his personality to infuse his utterances with a singular dynamism. Swami Vivekananda’s unequivocal views on the place of spirituality in human life in general and in Indian culture and her future particularly; on the distortion of Indian history by the Euro-central world view and the consequent debased self-image held by Indians, are some of the things that make his words a continuing source of clarity and inspiration. His ringing words of vigour call across the years just as strongly today as they did when he spoke them at a time when, it might be justifiably asserted, they were the single most important impetus for India’s freedom struggle from the British and the incomplete attempt to bring her culture back to its unique trajectory.
This selection from the Collected Works of Swami Vivekananda of some of his most inspiring words brings his message into sharp focus. His burning words of love and courage have a special relevance to the youth of today and we hope they can bring to today’s lost generation a sense of true direction and purpose to complete the work of realignment with India’s destiny.
Our homage at the feet of the true son of India and lover of God! 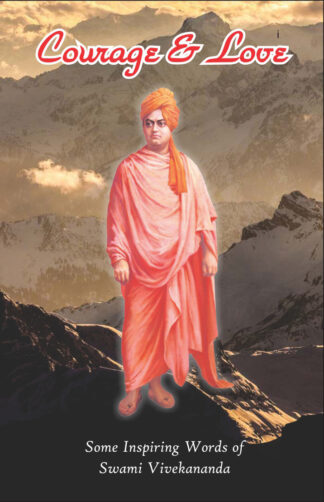