Categories: On Sadhana & Perspective on Deeper Issues, On Science

What is Science?
“Mind dealing with the facts and relations of Matter and Energy as they are arranged to the senses in experience and continuative experiment and are analysed by the reason, would be a sufficient definition of physical science.” Or in other words, Science is concerned with the systematic study of the physical and natural world through observation and experiment based on the power of human reason.
“Science is in her own way a great seer and magician; she has both the microscopic and the macroscopic, the closely gazing and the telescopic view, a dissolving power of searching analytic resolution, a creative power of revealing synthetic effectuation. She has hunted to their lair many of the intermediate secret processes of the great creatrix, and even she has been able, by the inventive faculty given to us, to go and do one better. Man, this midget in infinity, locomotive yet nailed to the contiguity of a petty crust of soil by the force of gravitation, has certainly scored by her a goodly number of points against the mother of the universe. But all this has been done in some perfection only in the limits of her lowest obtrusive physical field.
Face to face with psychic and spiritual secrecies, as in the open elementary world even of mind, Science has still the uninformed gaze and the groping hands of the infant. In that sphere she, so precise, illuminative, compelling in the physical, sees only the big blazing buzzing confusion which James tells us, with a possibly inaccurate vividness of alliterative phrase, is the newborn baby’s view of the sensible world into which he has dropped down the mysterious stairs of birth. Science, faced with what are still to her the wonderful random accords and unexplained miracles of consciousness, protects herself from the errors of the imagination, – but stumbling incidentally by that very fact into plenty of the errors of an inadequate induction, – behind an opaque shield of cautious scepticism. She clings with the grasping firmness of the half-drowned to planks of security she thinks she has got in a few well-tested correspondences, – so-styled, though the word as used explains nothing, – between mental action and its accompaniment of suggestive or instrumental physical functionings. She is determined, if she can, to explain every supraphysical phenomenon by some physical fact; psychological process of mind must not exist except as result or rendering of physiological process of body. This set resolution, apparently rational and cautious of ascertainable and firmly tangible truth, but really heroic in its paradoxical temerity, shuts up her chance of rapid discovery, for the present at least, in a fairly narrow circle. It taints too her extensions of physical truth into the psychological field with a pursuing sense of inadequacy.”53
Science, based on human reason, moving as it does from a starting-point of ignorance (and in a great environing circle of ignorance) must proceed by hypothesis, assumption and theory subject to verification of some kind convincing to our reason and experience. Being based on reason, it is also subjected to the difficulties of human reason. “The system of science seems to be itself only another feasible and fruitful construction of the reason giving a serviceable account to itself of the physical world and our relations to it, and it seems to be nothing more. And its knowledge is fatally bound by the limitation of its data and its outlook. Science too creates only a partial image of Truth stamped with a character of much uncertainty and still more clearly imprinted with the perverse hallmark of insufficiency.”

There are no reviews yet.

Be the first to review “Science and Spirituality” Cancel reply 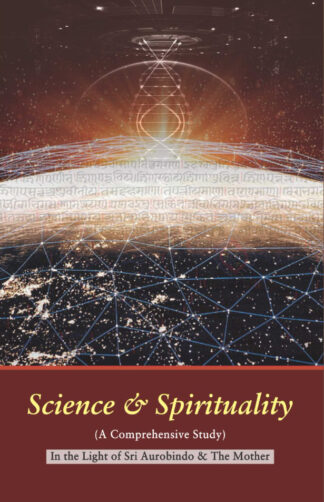 You're viewing: Science and Spirituality ₹225.00
Add to cart